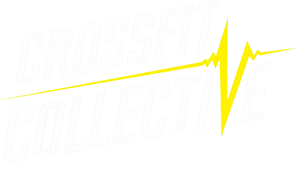 WHAT OTHERS HAVE TO SAY

“I tried CrossFit with the intention of learning olympic lift skills to take back to the Y with me. But I became hooked.

The workouts have been extremely effective at improving my fitness and efficient for this busy mom who doesn’t have hours to spend at the gym. Since I’ve joined CFC I’ve lost weight and have shown major strength gains. Though, most valuable to me has been giving space for that voice saying “you’ve got more in you” to grow louder and become more believable. Thanks to the amazing community at CFC that motivates me everyday, my mental toughness has grown way stronger than I knew possible.”

“I have been trying to get into better shape since December of 2017. I lost 58lbs in the beginning and got into better shape, or so I thought. For about a year I made the motions of doing the daily WOD and kinda eating right. I thought I hit a plateau. The weight was slowly coming back on pound by pound. I heard about Collective from a few of the newer members. They said the WODS were tough and the coaches were great. July 2018 I tried Collective out for the first time. From day one Josh pushed me to go harder. He’s always in the back ground “let’s go Rullo, this is how we get better.” I’ve learned so much from Josh, Febes, Jessie and all of the coaches there. They are all so helpful. You may wanna give up but they won’t let you! A few weeks ago I raised a concern that I plateaued again. Josh and Jessie immediately started helping with what I call Chub Club extra cardio three days a week and chatted a little about my diet. In the first week I lost near 10lbs and a fire was relit that I lost. Believe you me, the WODS are tough, you’re gonna have to dig deep sometimes. But every single person at Collective is gonna cheer you on and help when you need it. Thank you to all coaches and members!!!”
– Steve Rullo
“I have always had a hard time sticking with a fitness routine, until I found CFC. The coaches are great, the community is welcoming, and I am seeing results from the hard work, which pushes me to work even harder. CFC provides such a positive overall experience. I look forward to my gym time everyday. “
– Shane B

“I walked into CFC about 8 months ago at probably the most unhealthy point in my life and now I’m the most fit I’ve ever been. The friendly, encouraging, and motivating environment of CFC helped me make my health a priority again. I also can’t say enough about the coaching, it’s simply the best! You can tell all of the coaches have a passion to help individuals reach their goals and potential. Always looking forward to the next class!”

“Since I’ve joined Crossfit Collective I have slept better, gained muscle, lost fat, gained confidence, sobered up, drastically improved my mental health, and made a bunch of friends along the way. CFC makes me a better person, by far. I only wish I would have started years ago.”

Since I joined CrossFit Collective my strength and endurance has gone through the roof. I can easily say I’m the healthiest I’ve ever been. The passion, knowledge and attention to detail the coach’s have is unbelievable. Their hunger to make me a better athlete is just as strong as my hunger to get better. I was never an early riser to workout, but the CFC programming and community has me wanting more every day. Excited to see where this journey takes us!” 🙌🏼

“When I joined Crossfit Collective, in Sept 2019 I knew I needed to make some changes. Physically I was uncomfortable in my own body and mentally I hated working out but forced myself to do it. My fitness priorities were completely upside down with nutrition being the last place I wanted to make real change. The COVID lockdown was tough on me emotionally and it was huge set back that caused me to feel so defeated. I started working with Jessie on my nutrition in May and all things fitness related started falling into place. Since then, I have gained a ton of self-confidence, learned to push myself harder, lost 15 lbs, and completely changed my “have to workout” mentality to a “love to workout” mentality. All thanks to the Collective coaches and community!”

I don’t believe there are words to express the way I feel about this CrossFit community. I was referred to CrossFit by a coach who was interested in recruiting our daughter to play basketball in college. I had heard a lot of negative stereotypes about the sport, so I was skeptical. I also was intimidated because I was in the worst shape of my life. After I spoke with Josh and Febes, my daughter Kiersten and I started last September. My initial concerns were addressed when I saw how each coach emphasized form over heavier weight. I was also taken back by how all of the members took an interest into Kiersten and I and how we were doing. About a week later my son joined and all three of us were going at least 3 times a week.
Fast forward to a year later, and my whole family attends this gym. Kiersten is now training 1 one 1 with Jesse and the gains the colleges and her coaches have seen in her speed, strength, and mobility is unreal. In addition, Jared has continued to get stronger and improve and I am answering “what has that kid being doing?” from coaches and parents because they see the strength and conditioning he has gained over the last year.

As many at the gym know, my oldest daughter, who was a phenomenal swimmer, tennis, and lacrosse player, was diagnosed with a rare lung disease(ILD) about 2 1/2 years ago. The disease requires her to wear oxygen while she exerts herself. She started working with Febes 2-3 months ago and the change in her has been so drastic. Not only has her strength and stamina increased, but she has regained that confidence that she had as an athlete. My wife was the last one to join, and she has been attending for two months. She has found a renewed excitement associated with working out.

Even with all of the things I mentioned above, those points pale in comparison to the greatest asset of this gym, the community. I cannot begin to thank Jesse and Febes for the positive impact they have had on my daughter’s lives. They are great examples of what a mentor and role model should be and the type of coach that a parent hopes for. They have connected with each of them on a personal and professional level and I know they truly care about our girls. All the other coaches, Josh, Naomi, Brian, Dana, Nate, Steph, and Eric, I can’t thank them enough for pushing us, correcting us, and encouraging us. You guys and gals are the best. Lastly, the members at this gym make it feel like a home. I don’t know who else I’d rather do 3 rounds of 30 cleans, 30 box jump overs, and 20 calories on the rower with a 10 minute cap with. So while, I could write pages about what the owners (Josh & Febes), the coaches, and members have done and mean to me I will end with this. If you want to go somewhere where they will meet you where you are in your journey, accept you, and then instruct you, push you to be better while supporting you all the way, this is the place for you.”